The ultraviolet (UV) component of sunlight causes DNA damage that, if not repaired, can lead to mutations and increased risk for skin cancer. UV light induces two major types of damage: cyclobutane pyrimidine dimers (CPDs; 70-80 % of total damage) and (6-4) pyrimidine-pyrimidone dimers [(6-4)PD; 20-30 % of total damage]. CPDs are formed by covalent bonds between two carbon atoms (C-5 and C-6) of adjacent pyrimidines in the same DNA strand, forming a cyclobutyl ring; (6-4)PDs are formed by a covalent bond between the C-6 position of one pyrimidine and theC-4 position of the adjacent pyrimidine.

Nucleotide excision repair (NER) removes UV induced DNA damage. It is performed by a large multi-enzymatic complex made of more than 30 proteins, that repairs DNA via distinct steps: recognition of the lesion, incision of the damaged DNA strand upstream and downstream of the lesion, excision of the resulting ~30 nt DNA fragment containing the lesion, filling the gap by DNA synthesis, and ligation of the newly synthesized patch. NER is divided in two sub-pathways: global genome repair (GG-NER) and transcription-coupled repair (TC-NER). GG-NER repairs transcription inactive DNA and the non-transcribed strand (NTS) of active genes, whereas TC-NER repairs the transcribed strand (TS) of active genes. 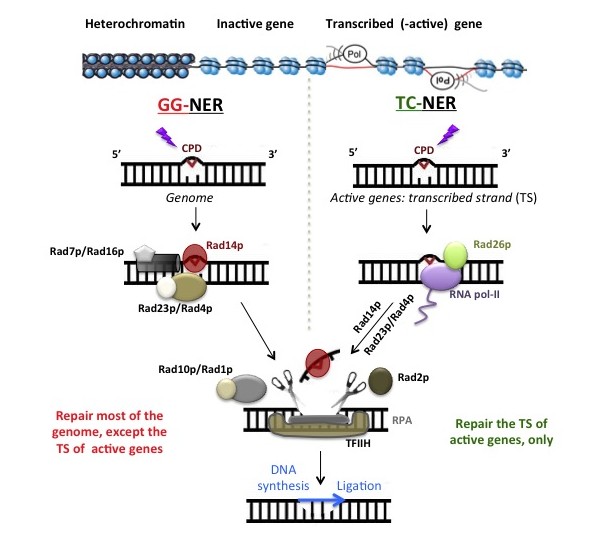 In eukaryotes, the genome is organized into nuclear domains that have distinct chromatin structures and functions: highly repetitive sequences, centromeres, telomeres, non-coding sequences, inactive genes, RNA polymerase-I, II and -III transcribed genes. Like DNA transcription and replication, NER is modulated by the structure of chromatin, and it is plausible that the kinetics of DNA repair vary among domains, suggesting that the mutation rate differs within nuclear domains.

How modifications of histone proteins and chromatin remodeling affect NER in vivo is a challenging question (see UV, NER and chromatin). Therefore, most of the current knowledge has been gained by in vitro studies. We employ the yeast ribosomal genes (rRNA genes, or rDNA) as biological model to help answer some of the questions related to how NER operates on chromatin, in vivo.

These characteristics have been observed in a variety of organisms, ranging from yeast to microplasmodia, plants, insects, amphibians and mammals. The existence of a non-nucleosome structure for active rDNA is consistent with the high density of RNA polymerases I on those genes: ~1 RNA polymerase each 100 base pairs of rDNA (or ~2 RNA polymerases per nucleosome DNA). In summary, the attractive feature of the rDNA locus is the 2 sub-populations of chromatin, which allow for direct comparison of NER dynamics in non-nucleosome and nucleosome containing DNA.

Many chemotherapeutic drugs generate DNA damage that block DNA replication and, or, transcription. This results in cell cycle arrest and apoptosis. However, cancer cells can avoid cell death by a number of mechanisms, whereby DNA repair is one of the most important.

Cisplatin induced DNA adducts block, or slow down, DNA replication and transcription, which corresponds to the “cisplatin induced toxicity”. Increased adducts removal (repair) is associated with cisplatin resistance, and enhanced removal of cisplatin DNA adducts is likely a main cause of acquired resistance of cancer cells to chemotherapy.

Results: Cells deficient in NER and HR were more sensitive to cisplatin (From Carlos Zeledon’s internship, 2011)
Ribonucleotide reductase (RNR) catalyzes the reduction of ribonucleoside diphosphates to deoxyribonucleoside diphosphates, which are required for DNA replication. Thus, inhibition of RNR impairs DNA replication. Because of the important role of RNR in DNA synthesis, inhibitors of RNRs are developed for their potential use in cancer treatment. One of the best characterized RNR inhibitors is hydroxyurea (HU). HU quenches the tyrosyl radical of the RNR small subunits, which is essential to the catalytic reaction.

The cellular response to HU treatments has been considerably well analyzed in the yeast Saccharomyces cerevisiae. It was found that the inhibition of dNTP synthesis by HU triggered the S-phase checkpoint response. In turn, this promoted stabilization of stalled replication forks and blocked cell-cycle progression. Additionally, it was found that in HU treated yeast there were groups of genes that were induced and other that were repressed. Among the repressed genes there were those implicated in cell wall biogenesis, cytokinesis, bud site selection and cell polarity, or those implicated in regulation of mitosis, transcription and rRNA processing.

Transcription of rRNA genes and the production of mature rRNAs are required for cell growth and cell division. For example, in fast growing cancer cells rRNA genes are heavily transcribed.

Electron microscopy of rRNA genes in mock treated (left) and HU treated (right) cells. Synthesis of rRNA is considerably reduced when cells are incubated for 2 hours in the presence of 200mM HU.

In yeast there are ~150 rRNA genes. From our studies on HU treated yeast, we concluded that most rRNA genes have an open form of chromatin, but only a portion of them is loaded with RNA polymerase I. Also, we found that the overall number of active promoters and RNA polymerase I-transcription activity remain largely unchanged after addition of HU to the media, indicating that in HU arrested cells rRNA genes stay ‘poised’ for transcription. However, despite of these characteristics favorable to transcription, rRNA synthesis is impaired. Hence, although the most important outcome of the HU response is the inhibition of DNA replication, it is conceivable that compromised rRNA synthesis could contribute to the slow-down of cell division, adding more significance to the use of HU in combined chemotherapy.